Situated along the beautiful bend on the upper Mississippi River at the intersection of I-80, LeClaire was home to the brave river pilots who navigated the treacherous Upper Rapids between LeClaire and Rock Island, Illinois. LeClaire is now home to "Antique Archaeology" and the "American Pickers," as seen on HISTORY. 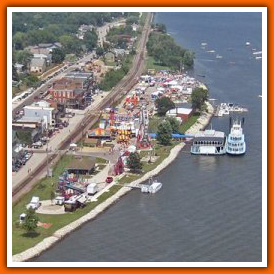 The City of LeClaire offers several options for visitors, featuring unique shops that include:

LeClaire also hosts several annual events, including our Tug Fest when LeClaire takes on Port Byron, Illinois for a tug of war across the mighty Mississippi River that culminates in an amazing fireworks display. Area attractions to interest visitors include the historic River Pilot Homes and the Buffalo Bill Museum, honoring LeClaire's most famous native son, William F. "Buffalo Bill" Cody, as well as local history and the Lone Star Steamer at the River Pilot's Pier on the LeClaire Levee that also includes a Boat Launch, parking, picnic areas and a Veteran's Memorial. Enjoy the Mississippi River on the Twilight River Boat cruise.

Looking for some recreation? LeClaire has several local parks and golf courses that include Olathea and Pebble Creek. The LeClaire Recreation Center features: 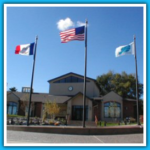 Lodging options include three hotels and several bed and breakfasts that are located with beautiful river views and within walking or short distance to downtown LeClaire's unique shopping district and numerous restaurants that include:

Nature photographers will be delighted at the best viewing of Bald Eagles in the continental United States at Lock and Dam 14 in the Winter and Pelicans that call LeClaire "home" during Spring and Summer months.

Some 60 structures compose the Cody Road Historic District in LeClaire, ranged along both sides of a 9 block stretch of U.S. 67, locally known as Cody Road and the community's principal thoroughfare. The road runs north / south, parallel to, and slightly above, the Mississippi River. It is heavily traveled, being the main road between Clinton on the north and Davenport about 15 miles to the southwest. The district contains both residential and commercial structures, the latter concentrated in the south end, and extending north along the east side of Cody Road. Most of the residential structures are found on the west side, facing the Mississippi River.

The boundaries of the Cody Road Historic District have been drawn to include all of the historic resources along the street, and stop at the north and south ends where modern construction fairly abruptly begins. On the west side, the district begins with 102 N Cody (NW corner Cody and Dodge) and runs through 816 N Cody. On the east side, the district begins with the first of three late 19th century commercial buildings (123 S Cody) and ends with 803 N Cody. Intrusive structures may be characterized wither as low, one-story blocks, faced with brick or artificial siding (some with a "rustic" look), or, on the west side in particular, larger, glass-fronted buildings with deep setbacks and large parking lots.

The Cody Road Historic District is significant both in terms of architecture and of history. The 9 block long area contains (for a small town) a rich variety of mid to late 19th century architecture and building types, ranging from the simple utilitarianism of workingmen's dwellings, and assorted forms of commercial architecture, to relatively stylish" examples of upper middle class residential construction. Furthermore, many of these resources can be associated, directly or indirectly with persons and activities that formed the basis of LeClaire's reputation, from the 1850s through the 1870s, as a bustling center of industry and commerce, and, above all, as a major participant in the history of Mississippi River trade and transportation.

The history of LeClaire began in the mid 1830s, when the first settlers came to the area. By the end of that decade, there were two towns platted, Parkhurst and LeClaire, the former just north of the latter. Parkhurst was eventually incorporated into LeClaire, along with the narrow strip of land between them which during the 1850s was known as "Middletown." Of particular importance in the history of the community was its strategic location at the head of a 15 mile stretch of rock-strewn water known as the Upper Rapids.

From the first, the Mississippi River played a predominant role in the life of LeClaire. Apart from the stone quarries and brickyards, early industry was mostly milling - grist and lumber, the latter of particular importance and longevity. Several fortunes were made in lumber here, and were reflected in the fine residences of such men as William Headley (226 N Cody) and James McCaffrey (208 N Cody).